Research led by Professor Paul Evans, in the School of Science and Technology, has landed Nottingham Trent University a Times Higher Education Award for outstanding contribution to innovation and technology.

The award recognises research on a 3D X-ray scanning technology that improves the way airports scan for explosives, weapons and other illegal possessions.

The research, which also won the university the highest accolade of a Queen’s anniversary prize a year ago, has resulted in a multi-million pound grant from the US Department of Homeland Security.

Professor Evans said: “I was honoured to receive such a prestigious award on behalf of my team and the university. It a testament to the impact of our research.”

Nottingham Trent University has formed a spin-off company based on the research – Halo X-Ray Technologies – with Cranfield University to commercialise the technology.

Judges were impressed by the commercialisation of the research, saying the pioneering work had “led to the development of 3D imaging that is now used worldwide in managing security and public safety”. 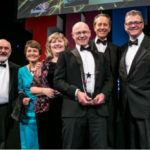