The Testing Cloud is developing performance testing tools for websites and mobile applications, which have been shown to surpass current methods in both security and efficacy. According to research undertaken by HCL Technologies, the testing tools market is expected to rise to $34bn in 2017.

The company, which was founded by Sascha McDonald, former Head of EY’s testing arm, has already secured two blue-chip customers, including an international accounting firm. Mercia’s seed investment will help The Testing Cloud expand its product capabilities and its team.

The Testing Cloud’s first product, which has passed minimum viable product (MVP stage), is called Cloudload (www.cloadload.io). It allows companies, from start-ups to global organisations, to test their websites via the cloud using a variety of simulated loading situations. An example of this process is to test the stability and response of a website’s e-commerce platform during periods of peak concurrent user activity.

Performance testing is vital, particularly for businesses that are solely web-based, because it helps to spot performance flaws in a system before it is made ‘live’. Used effectively, performance testing can prevent website crashes, and subsequent reductions in traffic, particularly when certain functionalities within the site are predicted to be used by a large amount of people. A recent example is the gov.uk website crashing after record numbers of people attempted to register on the electoral roll ahead of the EU referendum. Effective load testing could have prevented this.

Rob Johnson, Investment Director and Head of Software & the Internet at Henley-in-Arden based Mercia, said: “We are pleased to invest seed capital in The Testing Cloud, which is already receiving strong commercial interest.

“We will now work alongside the team to support their preparations for a full commercial launch, using Mercia’s wealth of industry contacts to ensure that The Testing Cloud is able to build a strong and effective team.”

Sascha McDonald, CEO of The Testing Cloud, said: “We look forward to working with Rob Johnson and the team, who have extensive experience in supporting early stage businesses, and who will provide a useful network of contacts as we expand our business.” 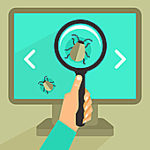