Two female entrepreneurs based at Innovation Birmingham Campus have been recognised at the latest Silicon Canal and West Midlands Women of the Year awards as industry leaders in the technology sector.

Pauline Roche, Managing Director at RnR Organisation, was awarded the West Midlands Women of the Year award for Outstanding Contribution to Technology with Faye Pressly, Chief Operating Officer at Vanti picking up the Silicon Canal award for Most Influential Female in Technology. 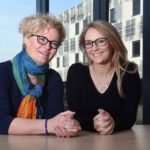